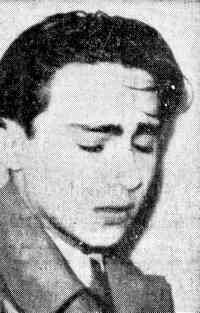 On 7 November 1938, a young Polish Jew, Herschel Grynszpan, was accused of murdering a Nazi diplomat, named Ernst vom Rath. According to the story, Grynszpan murdered Vom Rath to protest the expulsion of his family from Germany, along with thousands of other Polish Jews.
The result was the infamous Kristallnacht, in which all the synagogues throughout Germany, Austria and Czechoslovakia were burned and thousands of Jews were sent to concentration camps. It marked the effective start of the implementation of the Endlosing der Judenfrage.

Now it appears that Grynszpan was innocent. Today's Maqor Rishon reports that the Nazis staged Vom Rath's murder in order to create an alibi for their planned action. Vom Rath was a good target, because he was reputedly an anti-Nazi, career diplomat.

When I heard this, I immediately recalled that many years ago Prof. Ruth Bevan of Yeshiva University showed me an architects plan for either Dachau or Buchenwald, that was drawn up in the mid-1930's. It clearly showed an as yet unbuilt area of ther camp, slated for completion in time for the action that was planned for November 1938. I had thought that the Nazis planned the attack and waited for an excuse.

Now we know that they created it.
Posted by Jeffrey R. Woolf at 12:34

And if he had been guilty, would it have been so bad? By making arguments like this, aren't we conceding, a bit, some important ground, namely that there's nothing so wrong in killing Nazis?

(Leaving aside the claims that there was something other than revenge for anti-Semitic actions as his motive.)

Listening to news about trials for Guantanamo terrorists this week, I was reminded of the fact that after the war, Churchill wanted simply to line the Nazi leaders up against a wall and have them shot. He was overruled, because we're "civilized." Thus Nuremberg, for good or bad. But at least that was after the war. This wasn't.

I was just doing some reading on Herschel Grynszpan when I came upon your page. I have seen no evidence suggesting that Grynspan did not kill vom Rath. He freely confessed to it at the time and afterwards.

You are absolutely correct, however, that it was convenient timing for the Nazis, but if it had not been this event, they would have found something else as a pretext.