On Haredim, the Army and the Torah 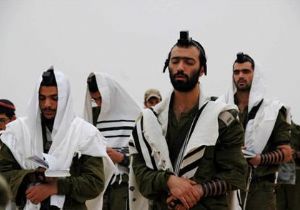 I have avoided writing about the Plesner Report, and the general call for Haredim to serve in the Army and enter the work force. I thought there was little more for me to add. I think I was wrong.
Herewith, then, are my thoughts.


לולא תורתך שעשועי, אז אבדתי בעוניי. I believe profoundly in the importance, centrality and supremacy of Torah Study for all Jews. Here, too, I have spent my life trying to learn and disseminate Torah in every way I could, especially through those media that were somewhat more unusual, and for which I am apparently uniquely suited. Here, too, I have tried to instill my children with an uncompromising commitment to תלמוד תורה and to serving as sources for תלמוד תורה in the many and varied venues in which they live and operate. The Jewish People's existence is predicated upon Torah knowledge and Torah observance. Our license to occupy Eretz Yisrael is conditioned upon these two, as well.
I believe that everyone should serve their country (whether in the Army or in National Service). That is how I have lived my life and that is how I have raised my family. I was too old to be drafted, so I spent ten years as a uniformed volunteer in the Israel Police (מתמי"ד). My wife volunteered at the local פינה חמה for soldiers. All of my children have either served in the Army or in שירות לאומי. Giving to the nation is an essential part of Judaism. Not serving is selfish and actively hurtful.
I believe that the Torah demands that people work for a living to support their families. Indeed, I believe that the Torah aligns with the position of R. Tam, as cited in מחזור ויטרי (no. 425 and a few other places). On the משנה in Avot that טוב תלמוד תורה עם דרך ארץ, R. Tam says:

Not everyone is meant to be a גדול בתורה, though each Jew has his unique mission. To force those not qualified, by social and religious pressure, into such a procrustean bed (to be supported by others) is absolutely unacceptable. Moreover, it is a fact that the price that is exacted from the Yeshiva community itself is horrific. The poverty, malnutrition, physical and mental abuse, divorce, and abandonment of religion that are daily occurrences are, to a significant degree, a result of this policy. [Let me just add that, at its height, there were never more than 300 students in Volozhin. The graduates of Volozhin revolutionized and electrified Talmud Study and Halakhic decision-making. They provided the leadership of the יישוב in Eretz Yisrael. The same can't be said, בעוו"ה, of the products of the present system.]

Nevertheless, despite sharp ideological and halakhic differences with the Haredi World, I acknowledge that we have much in common. We both grew out of the same religious world, have many of the same heroes, learn by the same method, learn with the same שטים and are inspired by the same stories and memories. As Rav Aharon Lichtenstein שליט"א is wont to comment, the Modern Orthodox World has much to learn in the realm of religious intensity, חסד, and אמונה תמימה from the Haredi Community. As our sector seeks spirituality, it is finding its sustenance in Ger and Breslav, Izbitz and Mussar. We are all, hopefully, devoted to עבודת השם in its broadest sense.
So, I support the measured efforts of the Plesner Commission. I believe it is best for both the Haredi community, and the Israeli polity, for Haredi Men to serve in the Army or שירות לאומי (with appropriate conditions for their observance) and then to be able to work to support their families. Those who are promising תלמידי חכמים, should receive the same type of consideration as academic stars do in the Army.
I am convinced that this process, if respectfully undertaken,  will allow Haredim to join the Dati sector of society in exposing the broader community to Torah and Mitzvot. The potential קידוש השם is so massive that I dare not dream of where it might lead.
I am convinced that instilling Haredi men and women with the tools to cope with the world will strengthen their adherence to the values of Haredi Orthodoxy, as evidenced by the so-called 'New Haredim' led by Haim Zicherman and others. In addition, as the religious population grows, the Haredim will be forced to take responsibility for a larger share of running the country. There will be no one else upon whom to rely.
I believe that we are at a critical moment in Jewish History, and in the history of the State of Israel. I believe that there is a broad population, both Haredi and non-Haredi, that is open to the kind of gradualist program offered by the Plesner Commission.

I pray to הקב"ה that the radical secular anti-semitic, anti religionists and the Haredi rejectionists do not make unholy common cause to prevent its implementation.
Posted by Jeffrey R. Woolf at 20:03

what is the source for the assertion
about RIETS graduates?