Sobering Thoughts, or Why Obama's Naivte Could Destroy Israel

In 1938, the entire West couldn't do enough to make friends with Adolf Hitler, in order to avoid war.
The direct result was World War II and the Holocaust.

In 2009, the entire West, 'led' by Barack Obama (and his post-modern, ostensibly Jewish minions), can't do enough to curry favor with the mullahs of Teheran, led by Hatami and Ahmedinajad. They spare no effort to force Israel to self-destruct by creating an irredentist, jihadist state and not attacking Iran's nuclear weapons.

Is there no one in power who sees that Obama and Co. are leading the world unspeakable disaster?

One journalist who does is Caroline Glick. Required Reading for Yom ha-Zikkaron.
Posted by Jeffrey R. Woolf at 12:14 2 comments:

(Hat Tip for the Video: Jameel)

After so many years in Israel, כן ירבו, I still am profoundly moved when the sirens sound on Yom HaShoah and Yom haZikkaron. There is something overwhelmingly profound in its understatement. The moment is ineffable in the way wherein the individual unites with his own thoughts, and simultaneously melds into Jewish collective consciousness and memory; past, present and future.

Of course, as is well known (and over emphasized), Israeli Haredim are known to refuse to stand at attention when the siren goes off. Their argument is that such behaviour is inappropriate since it constitutes a willful act of imitating the gentiles, it constitutes a violation of the Torah's injunction against 'Walking in the Ways of the Gentiles' (חוקות עכו"ם). [Lev. 18, 3 and Rambam, Hil. AKuM 11, 1-4]. The argument, in my informed opinion, is extremely specious.

Yet, it is not of that I wish to write. Over the past few years, there has been an interesting shift among some Haredim. First, in order not to be provocative, many try not to be outside when the siren sounds. More significantly, the practice has developed to stand and recite Psalms while the siren blasts. I suspect that this started as a way of not ascribing significance to the siren, per se. However, as time goes on, I believe that this is the first step toward the integration, the Judaization, of the siren and its transformation into an ongoing Jewish ritual.

A tragic unity obtained among Jews in the death pits and in the creamatoria. I believe there will be unity also in the way in which they will be remembered.

The news today reported that PA negotiator, Saab Erakat, summarily rejected the idea of recognizing Israel as a Jewish state. according to the report on Israel radio, he added that even President Truman refused to do so. Erakat is a well-known dissembler, and it's said that no one in the Israeli media knew the truth, that Truman explicitly described Israel as a Jewish state, in his statement recognizing Israel on May 15, 1948.

The original document is on line here: 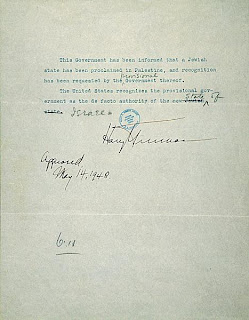 Pres. Truman, did in fact, cross out the words “Jewish State” in the sentence which originally read, “The United States recognizes the provisional government as the de facto authority of the new Jewish State.”

After Pres. Truman's changes, the sentence reads: “The United States recognizes the provisional government as the de facto authority of the new State of Israel.”

The document in question, however, begins with the following sentence:

This government has been informed that a Jewish state has been proclaimed in Palestine, and recognition has been requested by the [provisional] Government thereof.” (Emphasis added. Pres. Truman inserted by hand the word “provisional.”)

[According to Collins and Lapierre, (O Jerusalem, p. ) the words 'the new Jewish State' were originally there because no one yet knew the name of the new country.]

Erakat knows he's a liar. The tragedy is that most Israelis and, a fortiori, everyone else, don't know.
Posted by Jeffrey R. Woolf at 15:41 No comments:

Pesach Post-Mortem (I): Streits and Other Unseemly Matters

Pesach is a full time occupation, even after the house is prepared and the Seder properly celebrated. Hence, my Hol ha-Moed שינוי was not blogging. Herewith, then, the first of several observations now that we're back to normal.

1) I am still outraged by the decision of certain New York area Rabbinic Councils to withdraw their kashrut recognition of Streits products for Pesach. Never mind that the underhanded manner in which they did so is, per se, worthy of condemnation. What is even more outrageous is the facile manner in which they dismissed an established hekhsher, headed up by R. Moshe Soloveitchik (following standards set up by his father, Rav Aaron Soloveitchik, זצ"ל).

Now, I admit that I do not know R. Moshe Soloveitchik personally. However, people I know and respect, and who are (or were) outstanding Talmidei Hakhamim, do know him and have made it very clear to me that there is no legitimate reason to impugn his integrity or his Kashrut supervision.

This inexcusable act fully justifies excommunicating the offenders (נידוי). According to the Shulhan Arukh, anyone who humiliates an established rabbinic scholar can be anathemized by him, or one of his students (YD 334:16). The full implications are spelled out by Maimonides (Hil. Talmud Torah VI: 11-12):

11) It is a great sin to hate or humilate a sage. Jerusalem was not destroyed until people started despising the sages, as it is written, "But they mocked the messengers of God, despised His words and scoffed at His prophets", i.e. they scoffed the people who taught Torah. In a similar vein the Torah said, "And if you shall despise My statutes", which refers to humilate those who teach these statutes. Anybody who humilates Sages loses his share in the World To Come and is included in the verse of, "Because he has despised the word of the Lord, etc".

12) Even though someone who humilates the Sages doesn't have a share in the World To Come, nevertheless, if witnesses state that someone has despised even just their words, that person is punishable by excommunication. The Bet Din should publicly excommunicate him, and he is fined a pound of gold....Someone who humilates a sage after his death is taken to a Court of Law, and should have his excommunication removed only after he has repented. If, however, the sage himself is still alive, then he is taken out of excommunication only if the sage agrees to it....

This incident highlights the dangers inherent in centralized kashrut supervision. While such supervision has many salutary features, it also has very serious downsides. It takes the onus of personal responsibility off of the supervising agency. This actually vitiates the value of rabbinic supervision. Furthermore, it creates an atmosphere of fear, which can often lead to unjustified and often insipid stringencies (חומרות). These, in turn, can harm observance of the dietary laws by making them more difficult to observe than necessary (see my next post on קיטניות). Finally, as in the present instance, they can impugn reputable השגחות, like that of Streits, humiliate תלמידי חכמים and destroy a person's livlihood.

Finally, I can help but wonder what would have happened if the recent statements (slightly altered) had been offered thirty years ago:

'No one wants to mess with the Soloveichiks in general,” he explained. “There’s a feeling of reverence [for] the family”...The problem with Morrison and Schiff's lack of a national hashgacha is that “we don’t know enough about Rav Soloveichik.” “He just doesn’t swim in the kashrus world … we’re not saying he’s bad; not at all. We just don’t know.”
Posted by Jeffrey R. Woolf at 08:40 5 comments:

For Those Who Defended Obama....

Barak Obama has a lovely personality, and moreover, the holiday of freedom brings together the blacks and the Jews, who were among the greatest fighters for African-American equality. Still, we were hurt by Condoleezza Rice, who identified us with the white people who persecuted her during childhood, while viewing the Palestinians as the persecuted party.

Meanwhile, Obama’s rivals referred to him as “Hussein,” his middle name, in order to slam him. Yet in his recent visit to the Turkish parliament, his hosts happened to emphasize his “Hussein-ness,” and such things are coordinated with the guest. Obama, who has urged us to put ourselves in the shoes of the Palestinians, not only backs them; he also identifies with them.

We shall fee the difference soon. Barack Hussein Obama’s policy cornerstone is the establishment of “Palestine,” on the assumption this will extract the Americans from the mess in Iraq and Afghanistan, destroy the Taliban in Pakistan, and appease Iran.

Often when referring to cancer, people prefer to talk about “this disease, you know.” Around here we talk about “the price, you know,” in order not to go into detail about what shall be left here after Palestine is established. They speak cautiously, as one would address a patient before amputation.

Yet in the face of the razor-sharp ultimatum we can expect from Obama, enough with the hints: Imagine a border at Jerusalem’s Jaffa gate, with armed Palestinians standing on the Old City’s wall. Imagine a Dead Sea that is half in Jordan, and 50% of the remaining half belonging to Palestine.

Imagine a Negev divided into two near Kiryat Gat by a Palestinian bridge, and a Gazan demographic flood pouring into Jerusalem and the doorstep of our cities. Imagine Ben-Gurion covered by shoulder-held missiles deployed in the ruins of the Beit Aryeh settlement, thereby prompting us to move our international airport to the Negev.

We shall have 300,000 new expelled citizens, with fears of a minor civil war, in addition to a “Return from Palestine” tax in order to finance homes and jobs for the Jewish refugees. Some of them will move into the apartments of Israelis who will leave the country once the terror and missile fire resume.

We shall have bars and their girls making a living off NATO troops, who shall be deployed here in a dual capacity: Serving as a security prosthesis for our amputated land, and defending the Arabs from us. Their deployment would symbolize the new status of Israel and Palestine as areas under the auspices and monitoring of the International Quartet, in line with the original goal of the Road Map – both of them shall be sovereign just like Kosovo is.

And so, the independence of our “third Temple” would turn out to be shorter than the independence of the Hasmoneans, who ruled between the bouts of Greek and Roman control, and many would choose to live in modern-day Rome – that is, America – instead of being occupied by it here.

An Israeli author, who lamented the rightist camp’s elections victory, comforted himself with the hope that Obama would force us to compromise. This author is not scared by the frightening outcome, only a small part of which was described above.

However, the vast majority of people in this nation are not deterred by the warning issued by the peace camp – that is: if we refuse to accommodate Obama, we shall lose his friendship. Because what kind of a friend is the one who shoves a shovel into your hand so you can dig your own grave?
On the contrary: Golda, Rabin, and Begin were able to say “No!” to America, and the friendship was preserved.