If One More Person Says “Prozbul”… 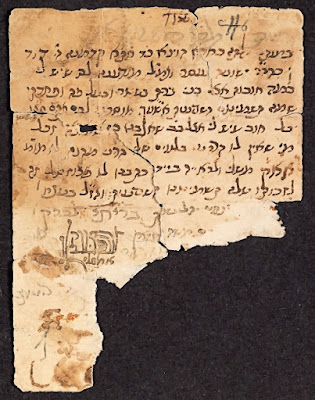 [1] I am not going to here revisit the Conservative allowance to drive to the synagogue on Shabbat. As issued, it amounts to little more than rough historicism. Ironically, a very cogent rebuttal thereto was issued by the Masorti Movement in Israel.


[5] On this use of topos as a literary trope, see E. Curtius, European Literature and the Latin Middle Ages, New York 1953, 80. The term was most significantly used in Jewish Intellectual History by the late Prof. Isadore Twersky.

[6] A recent discussion of the origins and development of Prozbul, with prior bibliography, is found in E. Ancselovits, “The Prosbul – A Legal Fiction?” Jewish Law Annual, 19, 1-16. However, while his discussion is quite thought provoking, it does not address the point at bar here.

[7] I am following the discussion of the topic by my colleague, R. Prof. David Henshke, ‘Ketzad Mo’il Prozbul? Le-Toldot Be’uro shel Taqqanat Hillel,’ Shnaton HaMishpat HaIvri, 22(2001-2003), 71-106. Both, per se and for purposes of the central focus of this essay, his presentation is the most persuasive and the most apt.


[8] The Mishnah in Gittin (4, 3) describes prozbul as an enactment for the correction of a societal ill (Tiqqun Olam).


[9] There is a difference of opinion as to the exact mechanism at work here. See Henshke, (85-92) and the sources cited there. Ancselovits (passim) describes the subsequent stages of development of the institution.


[12] Henshke notes that the Mishnah’s characterization of Prozbul as an ‘enactment’ (taqqanah) can be squared with either approach. The word can mean either ‘regularization’ or ‘legislation.’ The former connotation is appropriate with viewing Prosbul as an expression of a Biblical hermeneutic.


[13] Cf. H. Soloveitchik, ‘Religious Law and Change: The Medieval Ashkenazic Example,’ Collected Essays, I, Oxford 2013, 239-240. It is my conviction that even by the atheist-materialist standards of academic thought, the historian must presume the religious probity of the medieval individual (unless decisively proven otherwise). Cf. J. Woolf, The Fabric of Religious Life in Medieval Ashkenaz (1000-1300), Leiden 2015, 12-21; A. Gurevich, Categories of Medieval Culture, London and Boston: Routledge & Kegan Paul 1985. Startling confirmation of this contention is provided by the diaries of King James I of Aragon. Cf. R. Burns, ‘The Spiritual Life of James the Conqueror King of Arago-Catalonia,’ The Catholic Review, 62 (1976), 1-35.


[14] A review of the way that prosbul was adjudicated in Post-Talmudic Halakhah bears out this contention. See Henshke, passim and Y. Dinari, Hakhme Ashkenaz be-shelhe Yeme Ha-Beynayim, Jerusalem 1984, 200-203. Regarding the last point, see my essay ‘Masorah in the Teachings of Rabbi Joseph B. Soloveitchik zt’l,’ published here.


[15] This is not to deny that historical change does represent one variable, one tool, in the halakhist’s tool box. The parameters of the use to which such can be put to use is an very important topic on its own. It goes far beyond t he confines of the present discussion.


[16] I address this point in a forthcoming review essay in the Hebrew journal, Zion.
Posted by Jeffrey R. Woolf at 13:34 No comments: 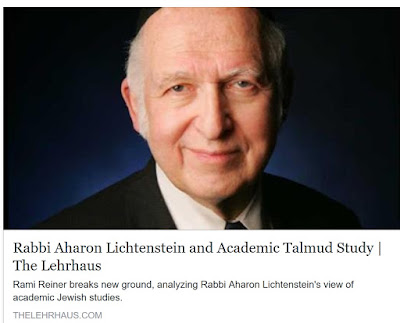 Readers will not be surprised that Professor Reiner’s discussion was of special interest to me, as it addressed questions that have concerned me deeply for quite some time (and which I have addressed here and here). The fact that it was Prof. Reiner, a person for whom I have the highest regard as a Talmid Hakham and a Scholar, who authored the article attracted me even more. However, as I did not have the privilege of being a student of Rav Lichtenstein (indeed, he was the only member of the family that I didn’t study with), I don’t have the temerity to directly address the question of why Rav Lichtenstein so stridently opposed Academic Jewish Studies. However, I have found that Prof. Reiner’s analysis (and subsequent discussions of the essay in Social Media) have enabled me to revisit a number of points relating to the relationship between Jewish Studies and Torah (or the lack thereof), and has helped me formulate my thoughts more carefully.

The major thrust of Prof. Reiner’s article centers on the academic conviction (shared by the author) that ‘our ability to properly understand our sacred sources—Mishnah, Bavli, Yerushalmi, Geonic Literature, Rishonim, and Aharonim—hinges on their textual, linguistic, and contextual examination in addition to their comparative study alongside proximal counterparts from cultures that neighbor them temporally and geographically and in their social and religious contexts.” Prima facie, this precise formulation encapsulates the  reasons for which Rav Lichtenstein objected to resort to academic Talmud in the Bet Midrash. By these lights, academic Talmud is thoroughly historicist, and uncompromisingly reductionist. In other words, Academic Talmud study purports to discover the original form and intent of the words of the Rabbis. The implication is that later interpretations are either incorrect or (at best) distorted. This assumption, in turn, severely weakens ongoing creativity in Torah Study as it calls into question the authenticity of the enterprise. As Professor Reiner notes, the Brisker school of Talmudic analysis is particularly a-historical, so that it is easy to understand Rav Lichtenstein’s opposition to this alternative approach. Furthermore, and more fraught with consequence, the anti-nomian implications of academic Talmud for Halakhah are self-evident.

As with so many discussions of this type, one can discern here an implicitly binary way of thinking. To begin with, it is simply not the case that an ‘original intent’ interpretation for a rabbinic statement, based on historico-literary context or philology, exhausts the authentic implications of any given statement. [1]

Such thinking, which is common among academic Talmudists and Jewish Historians, is guilty of ‘the Genetic Fallacy.’[2] In other words, one should not judge a phenomenon simply based upon its origins or sitz im leben. The interaction between Jewish culture and the outside world is far more nuanced than usually represented. In breve, outside ideas and forces certainly do have an impact upon Judaism and awareness thereof can enhance our understanding of certain passages (especially in the area of realia). That is normal. However, this impact is not wholesale or uncritical. In the Middle Ages and in Renaissance Italy (about which I can speak with some degree of knowledge), outside forces frequently responded to needs that developed within the Jewish World. It was these that made their way into the Jewish orbit. These were then adopted and adapted to the axiological structures of Jewish Life. Hence, the cultural context of any given passage only provides a partial understanding thereof; insofar as these accretions come to express naative Jewish values. Indeed, as noted, the process of influence is also neither unrestricted nor uncritical. Other ideas and forces that confronted Judaism from the outside were not granted entrée, for precisely this reason.[3]

Thus, there is no necessary contradiction between much of the academic endeavor and adherence to and acceptance of an organic, living tradition.[4] Levels of meaning and method are perpetually revealed in great classics of thought and literature (including conceptual analysis). Implicit methodological assumptions that bind generations of students together are as reasonable a reality as that which assumes protean changeability and discontinuity. This is true, all the more so, of a corpus which its bearers revere as the Word of the Living God.

This brings us to responses to the article that were raised by a number of te author’s colleagues among the alumni of Yeshivat Ha Etzion: The Question of Reverence.

A number of these commentators noted that Worship (or Service) of God (Avodat HaShem) lay at the core of Rav Lichtenstein’s essence, as a Man, as a Jew and as a Scholar). It was from that point of departure, these observers maintained, that he objected to the inclusion of Academic Talmud (and Halakhah) in the Yeshiva. He did not believe that this endeavor added to one's of ‘Fear of Heaven’ (Yirat Shamayim) to the student. On the contrary, it bore the seeds of spiritual corrosion.

Upon reflection, one can understand his concern. The academy is, by definition (at least, in its contemporary iteration) fundamentally atheist and materialist. God, or religious awareness, play no role in the scholarly calculus. Hence, it seems almost inevitable that exclusive adherence to this axiology will affect the inner life of the practitioner, even if he starts off as a person of faith.[5] One must strive mightily if one is to maintain both. [The personal price that failure engenders, was addressed in a previous post.]

Furthermore, at least in the area of Post-Talmudic History of Halakhah, I do not see how one can be a methodological atheist and a responsible historian. For, even if the scholar is a non-believer, the subjects of his inquiry were. They believed in God and they believed that they were interpreting and applying God’s Law in the world. They felt profound deference to the words of Tradition. They were deferential to, and self-limited by, those words.[6] Denial of this reality seems to me to be an historical distortion.

Finally, there is an epistemological struggle for priority between the two worlds. To return to Medieval imagery, the question is which is to be the 'handmaiden' and which 'the Mistress.

[1] As I’ve frequently noted, academics are no less rigidly dogmatic than divines. Indeed, they often tend to be more so. Pace academic aspirations, it remains a fact that the scientific endeavor is profoundly conditional in its findings. If this is true of ‘hard’ science, a fortiori is it true of the Social Sciences and Humanities. Academic scholars do the best that they can with the information and tools at their disposal. However, I’ve always been bemused by academic certainly (as a practitioner), in light of the radical limits of the enterprise.
[2] Cf. D. H. Fischer, Historians’ Fallacies, New York 1970, 164-187.
[3] See H. Soloveitchik, ‘Three Themes in the “Sefer Hassidim”,” AJS Review, I(1976), Part I.  It will, no doubt, be objected that this model presumes a degree of integrity and continuity within Judaism that might be deemed ‘Essentialist.’ That, indeed, is the case. I subscribe to the notion that while there is certainly change and development within the Jewish Religion and its Civilization, there are clearly identifiable lines of continuity that transcend the generations. It is this methodological conviction that underlies my use of ‘History of Ideas’ approaches to Jewish Intellectual History.
I would add that the present abhorrence for ‘Essentialism’ in academic circles (itself suspiciously extreme) is itself in retreat (as is 'theory,' generally) and a new found respect for continuities is asserting itself under the label of ‘Neo-Essentialism.’
[4] Cf. Rashbam, Gen 37, 1.
[5] With significant exceptions, and Professor Reiner is absolutely among these, I have long gotten the sense that Jewish Studies practitioners seem to develop judgmental postures toward their subjects of study, reminiscent of the way wherein critics often demean great artists. It often appears that love and reverence for the great figures and works of the past are far from bon ton. Consider, by way of contrast, the passionate involvement of Prof. Giuseppe Mazzotta in the study of Dante, without impugning the power and credibility of his scholarship. [NOTE: In a private communication, I was informed by another student of Rav Lichtenstein that this issue was central to his thinking about Academic Talmud as practiced.]