I am still too deeply in shock to write about the events of last Shabbat. After much soul searching, and after the family requested it, I am posting this video that Youtube decided to pull.

Sacred Trash: A Must Read 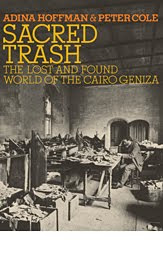 I just finished reading an incredible book, with a most unlikely title. It's called: Sacred Trash: The Lost and Found World of the Cairo Geniza. The book, which will be published later this month (and launched at the start of April) is the latest in a stunning series of original works that is published jointly by Nextbook and Schocken (NY). [I read an advance copy. Who needs proteksia when you have friends?]

The book tells the story of the discovery of the Cairo Geniza and the generations of scholars who extracted whole worlds from its detritus (a word the authors love to use). It is, however, much much more. The authors brilliantly recreate the personalities and interactions of the many colorful personalities who touched and were transformed by the Geniza. Names that I knew only as authors of important studies suddenly came alive, adding depth and excitement to the authors' tale.

At the same time, the book also brings to life various episodes and dimensions of the Geniza's riches with elegance and a keen sense of drama. The authors introduce us to Ben Sira and Hivi al-Balkhi, Karaites and Payyetanim, Dunash and Ha-Levi. It warmed my heart to anticipate how that which gets an academic's blood flowing can infect the lay reader with enthusiasm and interest.

I have to ask that the book is a joy to read. It's written beautifully. The wonderful use of language, the rich vocabulary and the passionate mode of description were simply intoxicating.

Sacred Trash, an absolute must read this Spring.

Sometimes You Need to be a Triangle

The prophets of Israel abhorred and excoriated those who hid moral corruption behind a mask of ritual punctiliousness. Typical in this regard are the defiant words of Jeremiah, uttered as he stood at the very entrance to the Temple (7, 9-10):
הגנב רצח ונאף והשבע לשקר וקטר לבעל והלך אחרי אלהים אחרים אשר לא ידעתם:
(י) ובאתם ועמדתם לפני בבית הזה אשר נקרא שמי עליו ואמרתם נצלנו למען עשות את כל התועבות האלה:
Will you steal, murder, and commit adultery, and swear falsely, and offer unto Baal, and walk after other gods whom ye have not known, and come and stand before Me in this house, whereupon My name is called, and say: 'We are delivered', that ye may do all these abominations?
Jeremiah's audience, tragically, never got the message. They paid a very high price for their obtuseness. Their descendants in the Orthodox community, both Haredi and Modern Orthodox, don't appear to be any more enlightened. There is a moral rot, an ethical disconnect that too often appears among the members of our community. This, it seems to me, is an especially egregious fault when we consciously blind ourselves to the heinous moral iniquities of those upon whom we look to as leaders.
It is truly incredible. We would not brook a thief or a murderer as a Rav, a Rosh Yeshiva or as a Religious intellectual who seeks to use his or her position to participate in the ethical discourse of the Observant community. However, we have no trouble ignoring or denying behavior which destroys families, undermines the lives of children and is no less worthy of moral calumny. We make excuses for them, מאכען ניט וויסענדיק, and bask in the chiaroscuro brilliance of their words and writings, teachings and pronouncements.
We have, it must be admitted, become morally obtuse and lost our basic sensitivity.

This apocryphal vignette puts it best:

While a Professor of Ethics at Harvard, Bertrand Russell carried on an adulterous affair. He was called in by the university authorities and censured. He maintained that it his personal life had nothing to do with his academic responsibilities. When it was objected that he was, after all, a professor of Ethics, Russell replied: “I was a Professor of Geometry at Cambridge,” Russell rejoined, “but the Board of Governors never asked me why I was not a triangle.”

This may be true in academia. However, it does not and cannot pass muster among those who presume to represent, and interpret, God's Torah. The Torah makes no distinction between ethical and moral behaviors, or between Yoreh Deah, Even ha-Ezer and Hoshen Mishpat. If you flagrantly reject one, you forfeit your right to an opinion on the others.
Sometimes, we are expected to reshape ourselves....even into triangles.
Posted by Jeffrey R. Woolf at 05:08 3 comments: