Torah and Masorah - Part I

[My previous two posts have, inter alia, a common theme: The problematic interaction between Jewish Tradition and Academics, especially Jewish Studies. I would like to continue that discussion, with an eye to segueing toward an examination of one aspect of the role of Tradition (מסורה) as a factor in Halakhic decision-making, and the setting of religious policy. This is a work in progress (with revisions), so that as this series progresses, אי"ה, I hope to touch on others.]

Almost twenty years ago, I had the opportunity to address the plenum of Kenes Lavie II (of which I was a founder). On that occasion, I discussed the fact that the leadership of the Religious Zionist community was woefully ill-prepared to engage the unprecedented religious, ideological and cultural challenges that the Post-Modern, Liberal West laid at our door. We lack the tools to critically examine the unstated (and often religiously hostile) assumptions of contemporary intellectual discourse. We lack the learning necessary to discern the full range of legitimate options with which the Torah provides us in order to engage the challenges of (post)-Modernity. Far too few representatives of Torah are able to present eternal truths in ways that the Western oriented can understand, much less respect. Even fewer are attuned to the ways in which General Culture enriches the life of the God Fearing, Observant Jew while, at the same time discerning of the limits to that encounter.
[A very promising methodological response to Modernity, which is actually Maimonidean in its contours, was recently provided by Professor Baruch Brody. As I will note in a future post, the situation is not appreciably better today than it was two decades ago, and demands attention.]

My specific point on that occasion was the need, the dire need, to include the study of Jewish History as part of the Torah curriculum in Yeshiva High Schools, Yeshivot Hesder and Midrashot and as part of the overall training of Rabbis and Educators. Such training was, and in my opinion remains, both valuable per se as well as critical for engaging the historicist challenge that, even then, was manifest in the community. The point of departure was a paragraph from R. Zvi Hirsch Chajes' introduction to his work 'דרכי הוראה.' 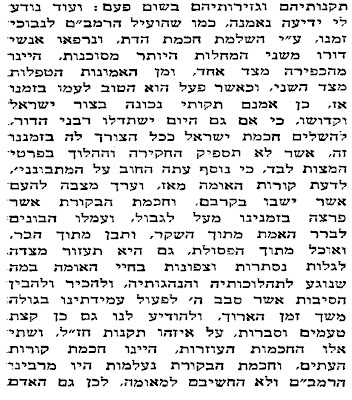 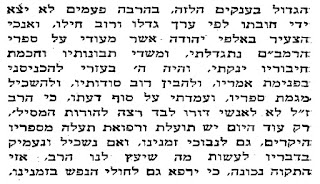 Maharatz Chajes, who himself possessed a PhD in History, cogently identifies the challenge posed by critical Historiography as of equal moment with that of Graeco-Roman Philosophy in the Middle Ages. As with Maimonides, who was his intellectual hero, he assumes that mastery of Jewish History and Academic method will enhance Judaism's intellectual stature. In this way it will help to fend off the criticism of Reformers that Judaism is antiquated and riddled with superstitions. I offered, in addition, that if one reads his closing paragraph carefully in light of parallel Programmatic sections by Maimonides, one can conclude that the study of Jewish History can serve as a source of increased spirituality and Service of God, as it uncovers the Ways in which Providence works in History, and preserves both Judaism and the Jewish People, despite all odds and unending travail (the addressing of which also arises as part of this effort).
Feeling immensely satisfied with my presentation, I descended the stage and encountered Rabbi Professor Ya'akov Blidstein. He pointedly asked me: 'What will you do with Historicism?'  Embarrassingly, not only did I not have an answer; I hadn't seriously considered the question.

Looking back, there were several reasons for this (and for the fact that I have only started to deal with this issue in recent years).

Religiously, I was (and remain) firm in my conviction as to the essential autonomy of Torah and Halakhah (see here and here). This is a point of departure that I learned from Mori ve-Rabi, Rav Soloveitchik זצ"ל and I have never seen any reason to deviate therefrom (which is not to say that Tradition doesn't change in details and applications. We will, אי"ה, return to this point.) My personal inclinations were reinforced professionally by the unique training which I received at Harvard. The program that was founded by Professor Isadore Twersky זצ"ל. Prof. Twersky was an avid exponent of the application of the 'History of Ideas' approach to Jewish Intellectual History (somewhere between the approaches of Lovejoy and Skinner). He sought the continuity in Judaism. He devoted himself to demonstrating that, alongside obvious interaction with the contemporary world, there are basic ideas and themes, dynamics and patterns that spanned the continents and transcended the generations (with an exclusive emphasis on the Post-Talmudic era). In this way, consciously or unconsciously (I suspect the former to be the case), he strove to balance what he viewed to be a facile, superficial historical reductionism that characterized Jewish studies. And, while he argued forcefully that Halakhah should be restored to its rightful place at the center of Jewish Intellectual History, the possibility that academic findings might impinge upon practice never arose (in my time, at least). No doubt, the fact that the overwhelming majority of his students were Orthodox and Yeshiva trained (many of them former students of Rabbi Soloveitchik and themselves Orthodox rabbis), reinforced this tendency.

There were also good sociological/social reasons for ignoring Historicism. Thoroughgoing historicism was (and remains) the hallmark of the Conservative Movement (a.k.a. Historical Judaism). Whatever it was that Solomon Schechter intended 'Catholic Israel' to mean, by the 1960's and 1970's it came to mean whatever Jews did in the name of Judaism. Hence, the prime directive became the adaptation of Jewish Tradition to contemporary mores by means of reducing any given law or practice to its original (presumed) context, which is itself achieved through academic research. Indeed, the late Professor Gerson Cohen (a noted medieval historian and Chancellor of the Jewish Theological Seminary), was quoted as saying that 'the study of history is Torah as we know it.' The threat posed by Conservative Judaism was a formative element of Orthodox religious awareness from the 40's through the 70's, even though Orthodoxy was well into its dramatic resurgence by the late 70's and early 80's. As a result, the use of historical research within the context of Halakhic discourse was simply not done.

By the late 1990's, much of this had changed. For reasons that are unclear, to me at least, the Modern Orthodox World became increasingly flaccid, intellectually. Rabbis and Laypersons quoted Rav Soloveitchik, but not as a result of engaging with the thought processes that lay behind his writings but, rather, dogmatically. This, in turn, was fed by the two, contradictory tendencies within the community. On the one hand, the same global deference to Rashe Yeshiva that had long marked the Haredi community, and a variation on the institution of Da'at Torah, appeared within the Modern Orthodox community in North America and its Religious Zionist counterpart in Israel. This more authoritarian turn led to a downturn in Orthodox Intellectual discourse, and a concomitant inability to rigorously engage intellectual and cultural challenges.

At the same time, ironically, a crisis of authority was actually starting. Orthodoxy was beginning to experience the first results of the dissolution of what Professor Haym Soloveitchik has famously call 'Mimetic Judaism.' In his famous essay, 'Rupture and Reconstruction,' Professor Soloveitchik addressed the disappearance of a living tradition of religious observance and spirituality that had dissolved in the Post-Holocaust World, leaving Religious Life to be determined by Religious Texts, alone. To this shift, following similar suggestions by Yoske Ahituv and Menachem Friedman, he attributed the increasingly strict, some would say authoritarian, observance of Halakhah that marks contemporary Modern Orthodox Jews (the so-called, 'swing to the Right').

This unstated fabric of religious life, wherein one patterns one's religious comportment on that of one's elders, and its replacement by religious life based upon books led to a serious shift in the quality of religious life and observance, per se. For much of halakhic decision-making is predicated upon a living, sometimes unstated consensus as to which authors have more valence and which have less. Similarly, there is a cautious and reverential flexibility to Halakhah and Religious Policy, which is also based on intuition and mimesis (again, a point to which I will return anon). This breakdown of living tradition of how Halakhah is adjudicated and Talmud Studied, came precisely at a time when the level of Torah and Halakhic Literacy among Orthodox Jews was greater than at any time in recent history. In tandem, the appearance of databases and websites (e.g. Bar Ilan's Responsa Project and אוצר החכמה, respectively) flooded, democratized and transformed the study of Torah and, especially, of Halakhah. This combination of basic skills and unlimited material, merged with an anti-authoritarian trend among acculturated Orthodox Jews who were increasingly affected by Post-Modernist individualism.

It seems to me, then, that the disappearance of the religious fabric that informed Traditional Jewish Life is responsible for the present chasm that threatens to divide Orthodoxy on both sides of the Atlantic. It is responsible both for extreme conservatism and even Halakhic Paralysis (in the case of מסורבות גט, for example) and for an increasingly aggressive type of religious individualism, on the other hand. In the absence of this religious fabric, other approaches to Jewish Tradition are being advanced by members of the Orthodox intelligentsia. That is where Professor Blidstein's question enters.

Looking Forward to the continuation